As every year in the run-up to the summer break, the OECD has published its forecast of agricultural price developments, and as every year, it announces a virtual stability of prices for the next ten years. While the retrospective review of these forecasts shows their limits, why does the OECD persist in error? It seems to persist in using general equilibrium models which, by definition, do not take into account any of the sources of instability in agricultural markets. This is all the more regrettable as the European Commission continues to use these forecasts to steer the Common Agricultural Policy.

The OECD’s outlook for international commodity markets for the 2019-2028 period was released last July. Unsurprisingly, stable prices are announced for all productions (Figure 1 below). The variations are so small that they are lower than the expected inflation around 2%: in real terms these are slight decreases, while in nominal terms, they are slight increases.

The stability announced for the next 10 years contrasts with the trend in prices observed over the recent period when the main agricultural products experienced sharp upward and downward variations, as shown in the left-hand part of Figure 1. Variations more than 30% from one year to another are frequently observed, which is very important for aggregated annual indices.

Can we really believe that international agricultural markets can become so stable?

Reviewing previous forecasts provides an important response. Figures 2 and 3 provide a compilation of price forecasts (nominal) for wheat and raw sugar going back to the early 2000s. In black, we represent the average annual prices observed and in color the forecasts, year after year. 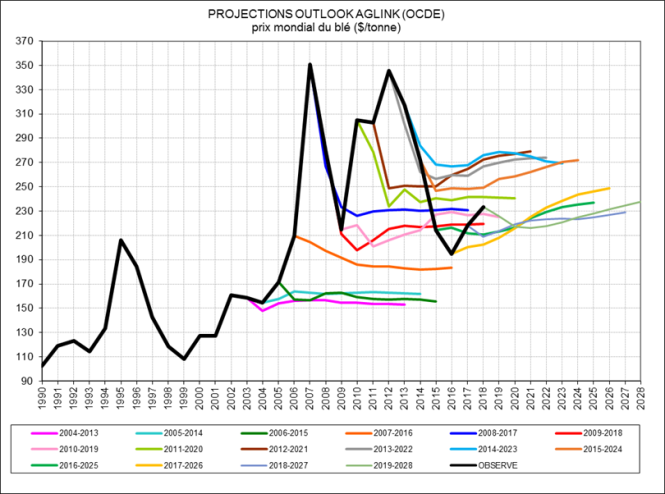 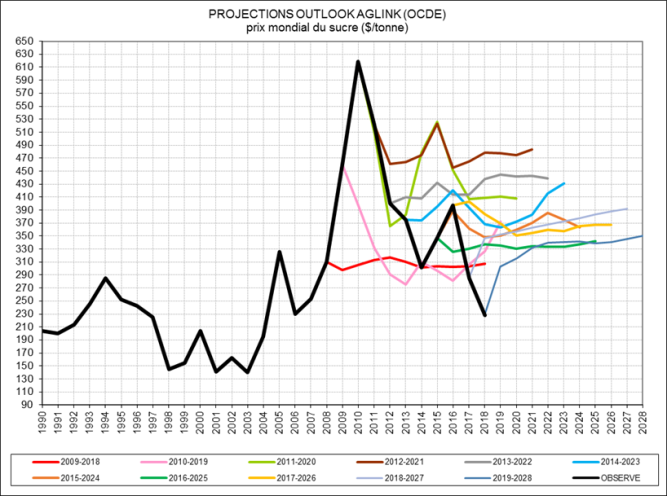 In view of previous forecasts, the robustness of this work leaves something to be desired. Without going into the methodological details, it appears that the model used to make these simulations, the Aglink-Cosimo model, has not yet evolved to represent the structural volatility of agricultural markets.

The general equilibrium models are, as their name suggests, built on the assumption that the game of supply and demand allows markets to be stable and at the price of being at their equilibrium level. , that is, the level of marginal production costs. In this way, these models are unable to take into account shocks on supply (drought, food panic, among others) or even the rigidities of the agricultural economy (incompressible time between production choices and harvesting, presence of fixed costs that limit the responsiveness of supply to a price decrease, etc.). Everything happens as if all producers (and consumers) were omniscient and adapted their production choices in anticipation of all decisions – necessarily rational – of other producers (and consumers).

Models have been developed to better represent the chaotic functioning of agricultural markets such as the Momagri1 model now included in the Agriculture Strategies know-how or the ID3 model developed by Jean-Marc Boussard2. These initiatives have shown that sources of instability can be integrated, but we can only note that the OECD’s Aglink-Cosimo model remains foreign to these developments. Why persist in error even though the outlook is one of the main outputs of the OECD?

What does the OECD serve?

The OECD is an international organization whose primary mission is to advise its members, the ‘rich’ countries, on the policies to be pursued. The European Commission, for example, uses this forecast of international price developments to build its own forecasts. It has been shown that the OECD’s recommendations on agriculture were based on the belief in market self-regulation and, therefore, only public policy measures aimed at internalizing environmental externalities are justified in its eyes. And, it is clear that the OECD software has not really evolved since the food crisis of 2007/08 even though the majority of countries are following a reverse path by strengthening their agricultural policies, with the notable exception of the European Union.

The use of the Aglink-cosimo model is clearly a political project aimed at further dismantling agricultural policies, which the EU is the only one to follow. This is all the more regrettable as this software is the one that explains the blocking of the Doha Round and the crisis of multilateralism since the 2007/08 food crisis. Under the guise of technique and science, we are witnessing what some sociologists call the fabric of ignorance: to remain the only model of the general equilibrium – whether for price forecasts or recommendations of agricultural policies – is in fact a form of obscurantism that would like agricultural markets to be stable and stabilizing agricultural policies to be useless at best.

Finally, it should be noted that the OECD explains in the comments accompanying its forecasts that the pursuit of technical progress in agriculture will continue to lower production costs and therefore prices. The current price levels are thus presented as falling within the normal range, even though no element in this report appears on the level of production costs, the income of farmers or any characterization of a crisis of agricultural overproduction. . If the prices are apparently more stable over the last 3 or 4 years, it is because they have returned to their level of dumping, that is to say the level of export prices of the few most important players. competitive but still insufficient to meet demand.

In the analogous report of 2016, we had already seen a distance from the OECD with the “speech of the nine billion mouths to feed by 2050”, a speech that had turned full to explain the increases in prices observed between 2007 and 2012. Now the page seems to be totally turned and we are reminded of the structural downward trend in agricultural prices, even though climate change is a veritable sword of Damocles. Also, if the OECD refuses to consider volatility, its analysis of the functioning of the markets is frivolous or unbearable lightness to resume the analysis of Jean-Christophe Kroll about how economists consider agricultural policies .

Left to play the Cassandra, we take date. If cereal stocks are much higher than they were at the time of the 2007/08 food crisis, it is to the credit of Chinese and Indian food policies that seek to protect themselves from a new episode of tension and will favor their populations such as Lafontaine ant. Also, in the next two or three years, we are not immune to a drought like that which hit the countries of the Black Sea in 2010 or the United States in 2012. And given the increase in the food deficit African, a new speculative rush of international markets and new food riots can not be ruled out. Ten years after the food crisis of 2007/08, one thing is clear: the international community remains struck by inertia and food security is mainly the individual will of States, except for rice where international cooperation has could emerge at the initiative of China. The OECD may again explain to us that we must avoid waste, limit export barriers and, above all, let market signals be expressed so that supply responds to demand. The circle will be closed and the OECD will have finished to disqualify itself on these subjects.

2 For a presentation of the ID3 model and its use : https://agriculture.gouv.fr/ministere/analyse-de-limpact-de-scenarios-de-liberalisation-des-echanges-agricoles-internationaux