The rising price of butter has become a burning issue. The evolving eating habits, tensions in international markets and the seasonal nature of production are the arguments frequently made to provide answers to the popular opinion, which does not understand why on one side some supermarket shelves are less stocked, and on the other dairy farmers are complaining of insufficient milk prices.

Two reasons explaining this trend are overlooked: the impact of the new European butter futures market in Leipzig and the low price for milk powder. Yet the Commission does not take them into account, when it could have prevented the situation of permanent imbalance of dairy markets currently in the process of staying.

1) A futures market for dairy products was launched in Europe in 2014 at the Leipzig Exchange. Business there is slow and it has no direct link with real markets as it is not possible to deliver the goods, unlike it is the case for grains. As a result, it is a virtual market that nevertheless has a crippling effect on real markets. The reason is as follows: about 50 contracts (of five tons each) of butter are traded daily (see graph 1), or the equivalent of 2.7% of the European butter production. It has therefore been a very narrow and easily manipulated market for the past six months, and we have observed a speculative increase in butter price quotations for the past six months. In early August, the price peaked at $6,900/ton, leading to a butter price increase to $6,500/ton in mid-September. Simultaneously, the butter quotation in the United States was less than $5,000/ton (see graph 2). Since then, a backflip occurred and the “Leipzig butter” now quotes at only $5,000/ton in November, and $4,400/ton next January, thus leading to the onset of lower butter prices. The virtual price thus declined by 37% in less than three months! The situation did not result in any regulatory measure by the European Commission, although the economic and social consequences are significant due to the speculative instability adding to the natural volatility of commodities. 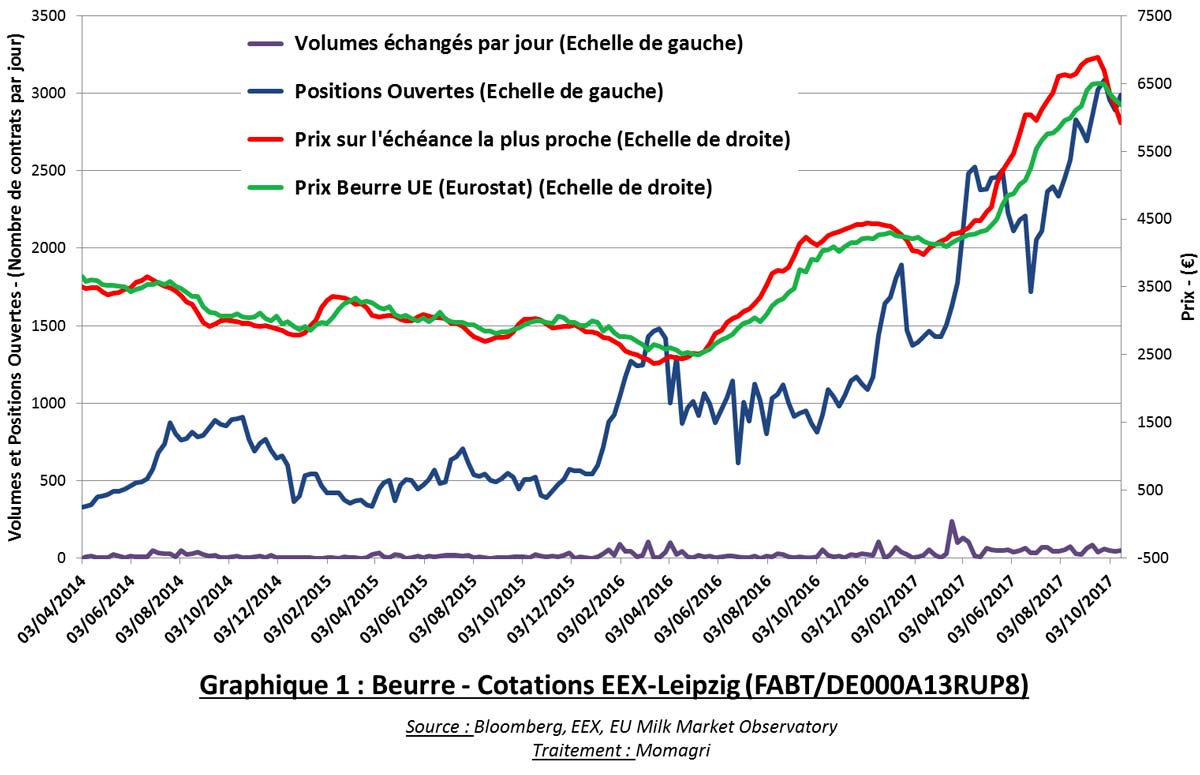 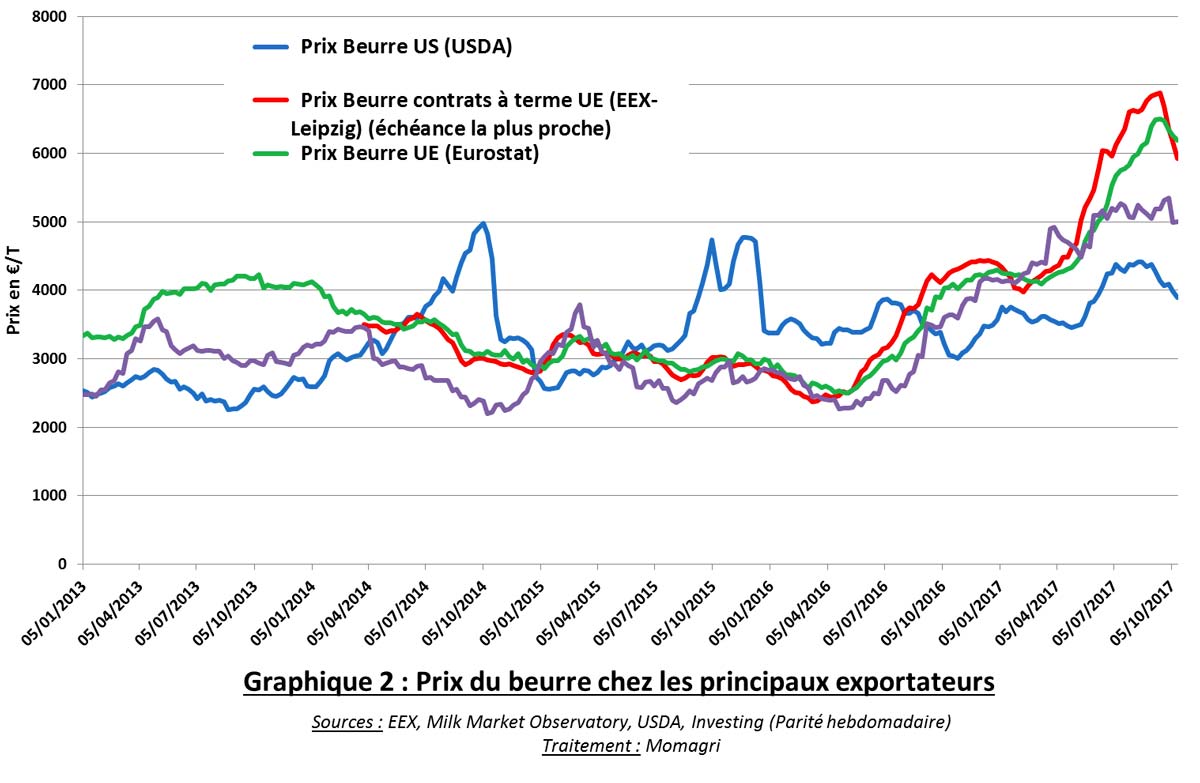 2) Butter production jointly implies producing skimmed milk powder. If these prospects are not profitable, milk is processed into cheese and whey. The recent milk crisis generated by the elimination of milk quotas resulted in a rise in European powder stocks of over 350,000 tons. These stocks only represent 2% of the European annual milk production and help keep powder prices quite low, which leads processors to prefer transforming milk into cheese and producing less powder… and thus produce less butter.

The presence of powder socks has a depressive effect on prices if agribusinesses consider them as means to avoid managing their own stocks. But what is quite more serious is the fact that the Commission fuels the decline by wishing to get rid of such stocks at bottom prices. This could result in a net €200 million budget costs (under the assumption of a 30% discount).

What should be done independently of a measure to stem the speculative consequences of the Leipzig market? Steering this powder stock level by only disposing of the bare minimum at prices not generating net costs for the European budget through the combination of the various available tools. For instance, as requested by some agricultural unions, to include milk powder in animal feed. Such measure should be attuned to exert an announcement effect and a price rebound. By doing so, the Commission will be able to sell a portion of stocks for human consumption, while making a profit that will finance a share of the disposal measure. Managing the powder market will drive butter physical prices at a correct level.

In conclusion, the European Commission must improve the transparency of dairy markets and make sure that futures markets in Europe fully respect the directives regulating financial operations. It should also build on the ECB action and the sectorial regulators working in energy markets, so that it is no longer in a troubled situation, as it is now the case.

Should the French Food Summit lead to the creation of an agri-food component for subcontracting rights?