The 2014 reform application choices related to voluntary coupled support demonstrate that this type of support, considered endangered for a long time, is now back in favor with a majority of the Member States. Its weight sensibly increases to represent 10% of the actual program’s Pillar 1 direct payments. This evolution reflects the growing dissatisfaction with the decoupled support and the political desire to possess tools to channel the production systems. Although the European Commission has always been fairly strict about using this support which the Member States must only apply on waning sectors, the Omnibus reform has recently make it possible to annually review the distribution of coupled support. Being able to revise these payments based on price variations in a countercyclical rationale could further improve efficiency. Should this be the very next step?

Based on the European Commission’s data1 on voluntary coupled support application choices, we have made some plots to illustrate the return in favor of coupled payments. Indeed, it is necessary to keep in mind that while the facility had not been included in the Commission’s proposition, the Council’s ministers and the European Parliament did largely negotiate for the use of coupled support. To keep it simple, the Member States that still have the coupled payments can choose to allocate up to 13% of their Pillar 1 envelope and up to 8% for those who have no more. A supplementary 2% dedicated to protein crops can be furthermore added to this amount. Finally, different derogations are accepted which allow Malta in particular to spend 57% of its Pillar 1 in this kind of support (see the graph below).

A south bloc and an east bloc

The graph above shows that 20 countries have used the maximum or a large part of the allowed limit. We can even complete this list with Scotland which, contrarily to the rest of the United Kingdom, makes great use of this mechanism. It can be seen in the following map that countries in the south (France and Belgium included) as well as those in the east of Europe (including Sweden and Finland) are largely in favor of coupled support. Between these two blocs, we find Germany, the Netherlands, Austria and Denmark, countries which prefer Pillar 2 to target the payments to supported forms of agriculture.

Ranking of Member States according to the coupled support amount

Among principal coupled support users, France and Spain have a similar profile: around 85% of the coupled payments are reserved to animal productions. 60% of the French envelope is dedicated to beef sector, 12% to dairy cows and 12% to sheep and goats. Meanwhile, Poland allows a larger part to vegetal productions, sugar beet in particular. Finally, Italy has a much diversified profile with cereals (mostly durum wheat for 19%) and “Others” category which especially covers olive groves (16%).

It is shown in the plot that 24 out of 28 Member States have chosen to assist their beef production. They are 22 to support the sheep and goat sector, 19 for the dairy or fruits and vegetables, and 16 for protein crops.

Considering the payment amounts, the beef sector is leading by representing 42% of total coupled support in Europe. Suckler cows are the most targeted (78%) even though support to fattening cattle is also observed (among 15% of beef support which goes to this category, detailed information about types of animal supported is not available). The sheep and goat sector enjoys 12% of the total package, with more support is aimed at sheep than goats (although the precise breakdown of the 32% of sheep and goat payments is not known based on the published data).

Chosen in 19 countries but the fruit and vegetable sector only receives 5% of the envelope. The payments go essentially to tomatoes, citrus fruits or fruits trees. Inversely, also appeared in 19 countries’ choice but the dairy sector gathers up to 20% of the total coupled support. 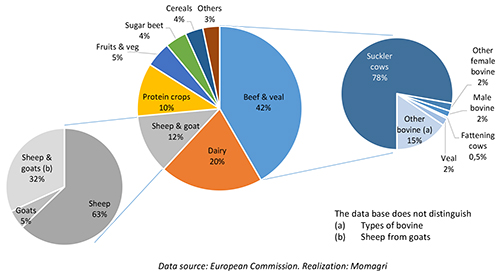 Breakdown of coupled support by sector

The support amounts per animal or per hectare vary among countries. Each country, having an individual envelope, chooses the sectors to target by meeting the quantitative limit (number of animals or hectares applicable). By dividing the total support of each sector by the applicable limit, we obtain the average sectoral aid amount for each country.

As shown in the figure above, the support amount per suckler cow varies between 55€ in Poland and 216€ in Hungary. It is 168€ in France, but like other countries, France applies a declining scale to the payment. For each farm, the first 50 cows receive 175€ each, the next 49 have 130€ and the following 40 get 69€ (amounts fixed for the 2017 campaign before year-end adjustment).

By doing the same calculation for dairy cows, we get the results presented below: support per dairy cow reaches 504€ in Finland. This country chooses a very low applicable limit to target certain regions and types of farm. The threshold corresponds in fact to 25% of the country’s total number of dairy cows counted by Eurostat. Contrarily, this is not the case for Hungary which stands at the second rank in terms of support per dairy cow with 300€. Its number of eligible cows is just slightly inferior to the total dairy cow population actually identified in Magyar farms.

Lastly, the sugar beet sector, marked by the end of sugar quotas in 2017, is chosen by only 10 countries. With 600€ per hectare, Romania opts to protect its sugar production that has already been in great difficulties so far. Apart from Poland which gathers 13% of European sugar beet areas, the other 9 countries are rather small producers. Altogether, they represent nonetheless 29% of the 2015 European total areas. All these countries defined the applicable limit slightly superior to their actual areas at that time. The support amounts calculated here thus involves the majority of harvested areas.

Futures markets and income insurances are not substitutes for public regulations 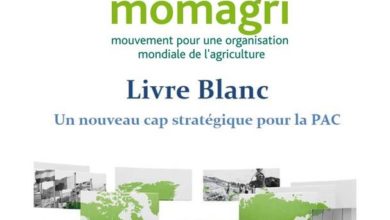 Momagri’s White Paper : A new strategic course for the CAP 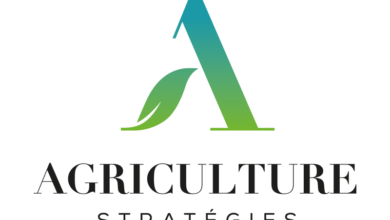