While a new law is announced on the subject of agricultural land, we are publishing a new report entitled “Regulating agricultural land markets: the main economic arguments“. In the first part of this study, we were able to mobilize among the great thinkers of the economy the main characteristics which distance agricultural land from any given factor of production. In the second part, we criticize the arguments against the regulation of agricultural land markets as it is implemented in France. You can also find a short presentation of the report in video format (in french) during the conference “Sharing & protecting the earth” recently organized in the French Parliament.

The second article, Ceta, Mercosur: the three reasons for the farmers’ opposition, which appeared on the Jean Jaurès Foundation website, was the occasion of a collaboration with two members of our orientation committee: Eric Andrieu, MEP and Dominique Potier, French MP. The following are thus identified: the divergence of production standards between the EU and imports, the gap between the precepts of free competition and the reality of the functioning of agricultural markets and, finally, the lack of reaction by the European authorities to a crisis in which agriculture has been sinking for more than five years.

Because the multiplication of bilateral agreements also results from the inability to renew multilateralism and to give it a second life, the date of December 11, 2019 with the blocking of the WTO appeal body is to be marked a milestone. In the article the WTO is dead, long live agricultural multilateralism, we develop the idea that if agricultural subjects can bring multilateralism out of the brain dead state in which it finds itself since the food crisis of 2007/08, it is certainly not to keep the same software!

Agricultural production continues to increase worldwide and, still, the number of malnourished people has been going up since 2015. The economist Quentin Mathieu returns to this apparent paradox in the article Degradation of the world food situation which clearly shows that low and / or volatile agricultural prices are more problematic for food security, especially for people in rural areas.

Finally, we offer two articles with very different angles on French agriculture. The first draws the main lessons from the latest report from the Price and Margins Observatory (OFPM). The second is a reading note, also published in the journal Paysans et Société, of a work by the sociologist Gilles Laferté, L’Embourgeoisement: une enquête chez les céréaliers, which offers a critique of the dominant approaches of French rural sociology but which , despite the quality of the survey work carried out, is largely mistaken for the deterioration in the economic conditions of cereal producers. 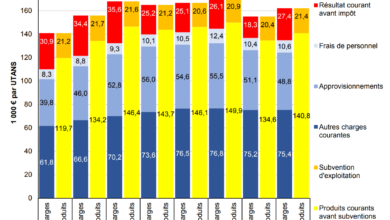