Like all WTO members, Switzerland has committed to abolishing its export subsidies. The “chocolate law” which made it possible to pay subsidies to exports of processed agri-food products was abolished on 1 January 2019. In substitution, the Swiss Confederation will pay farmers additional coupled aid for wheat and milk. For the latter, it is already foreseen that this aid will result in lower prices for producers that will allow processors to supply funds that will be used to continue to compensate exporters. This new type of runoff highlights the functioning of a sector where the elimination of milk quotas in 2009 has led to the strengthening of the power of the processors in the management of the sector.

Following the WTO Ministerial Conference in Nairobi in 2015, Switzerland resolved to abolish its main export subsidy program, the “chocolate law” as of 1 January 2019. This program introduced in 1974 was to “compensate for the handicap suffered by the Swiss agri-food industry as a result of agricultural policy” 1. In 2015, respectively 11% of wheat flour and 6% of milk produced in Switzerland benefited from export subsidies for a total budget of 95 million Swiss francs (or 89 million euros at the current exchange rate). The amount of export subsidies was based on the difference in commodity prices between the Swiss market and the global or European market. The aim was for the Swiss food industry to continue “to use Swiss raw materials to produce competitive export products in the global market” 2. At the same time, for imports, mobile tariffs raise the price of commodities at the Swiss price level.

The revision of the “chocolate law” led to the introduction of a new direct production aid of 4.5 cents per liter for all milk production, which it whether exported or not (for a price of milk between 50 and 75 centimes per liter). It is explicitly foreseen that this aid will result in a similar decrease in the level of the price of milk paid to the producer so as to allow the processors to feed two funds managed by the dairy inter-branch (IP Lait). The first will receive 80% of the levies, it will be used to finance food manufacturers to “offset the difference between the price of Swiss milk and that of the EU and promote the development of new export markets.” The second will receive the remaining 20% ​​and will be mobilized by the milk industry for the export of butter. The figure below schematizes the transfers between the different actors envisaged in the new program.

Figure 1: The new system put in place by the Confederation following the repeal of the chocolate law (source: Swiss Milk Producers)

The new coupled aid of 4.5 cents per liter of milk will be paid directly to producers. The Swiss Confederation took the opportunity to reform the cheese production aid program, established in 1999, which until now had provided 15 cents of aid to processors in exchange for the purchase at a higher price of the cheese. milk for cheese production. Cheese production mobilizes about 40% of the milk collected, for the remaining 60% we speak of “industrial milk”. Also, the aid for “cheese milk” was reduced by 10.5 cents to take account of the new aid of 4.5 cents.

The dairy inter-branch at the center of the sector

This reform of the “chocolate law” places the milk industry at the heart of Switzerland’s export strategy. This structure was created in 2009 at the time of the crisis following the end of the Swiss milk quotas officially entered into on January 1, 2009 but, in fact, largely anticipated in 2006 when producers could exceed the production ceilings if had additional opportunities. Initiated by the union of the Swiss Union of Farmers, the PI milk was intended to segment the production of “industrial milk” according to the different outlets in order to ensure a sharing of the balanced value between the links of production and transformation. In addition, an individual reference system was intended to give producers an indication of the effect of their increased production: they were free to produce more but the extra quantities were paid at a much lower price. But in the end, these provisions were never enforced. The reason generally invoked is the governance of the milk PI, which was marked by the takeover of the processors, sitting both in the college of processors and in that of producers through producer-user organizations (OPUs), and the withdrawal of the public authorities who have nevertheless reinforced the PI milk by granting it “binding force”, ie a power of sanctions in case of non-compliance with the rules3.

However, starting in 2013, the IP milk has implemented a less developed segmentation system focused on higher value-added valuations for the Swiss market (85% of production) and largely protected from European imports by rights. significant customs. The milk PI thus publishes price evolution indices that are fairly well followed by processors. In addition, the “standard contract” imposed by the IP milk by the “compulsory force” orders the milk buyers to announce in advance the quantity and the price paid to the producer for the production of the coming month. Moreover any purchase or sale of milk must be the subject of a written contract and the processors must declare what they produce to the IP milk.

The reorganization of producers, which was supposed to take over from the milk quotas, has therefore only partially succeeded and the current system is mainly due to the customs protection available to Switzerland vis-à-vis European imports. Since the end of quotas in 2009, the price of milk has fallen significantly, especially for industrial milk, and is approaching European prices. But the evolution of milk prices must also be compared with the other direct aids levied by farmers: the minimum level of aid is 1200 Swiss francs per hectare (1477 euros) and the average at 2800 francs per hectare4 (or 2274 euros)! The new aid of 4.5 cents is therefore added to other public support also in progress. 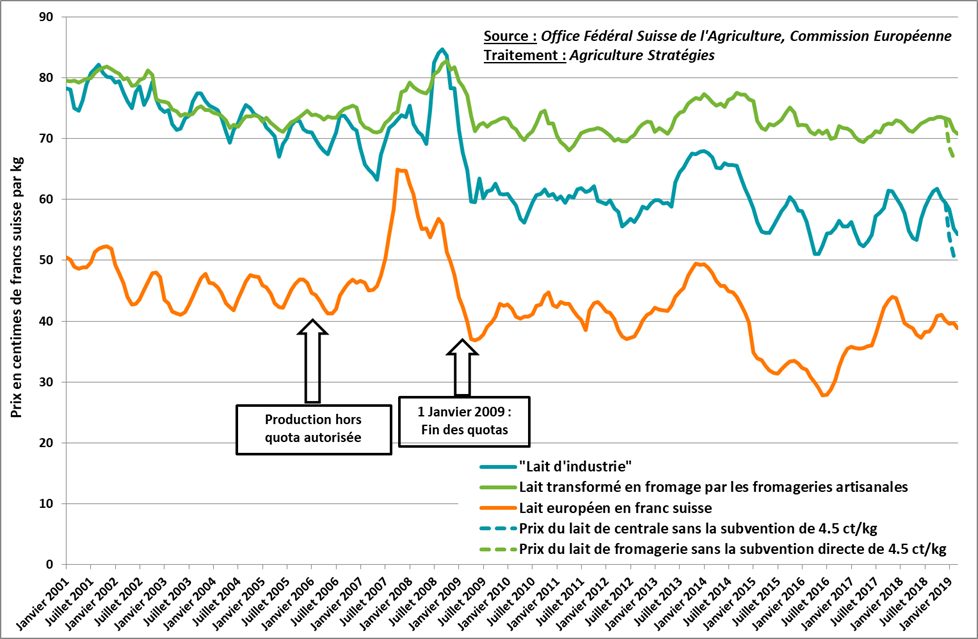 Figure 2: Evolution of milk prices in Switzerland and the EU (Swiss francs)

In the end, as can be seen with the reform of the chocolate law, the Swiss Confederation is not ready to give up its support for its agri-food exports. With this reform, the management of the sector by the inter-branch and its dominant player, the dairy processing, is reinforced, as the public authorities fade. This evolution is not without question to the producers but also to the agri-food industry and political parties5. On the one hand, we denounce a sleight of hand or even a “sham”, on the other we consider the current organization as transient. The passing on of the coupled aid in price reduction, presented as a matter of course, gives indications on the formation of the price of milk which is more imposed by a dominant actor than negotiated between parts on an equal footing. The end of milk quotas has also given the hand to manufacturers who fix themselves the volumes collected to producers without alternative.

The liberalization of the sector will have led to the control of the sector a cartel of transformers. As it stands, the future of Swiss milk production depends on the strategy of this cartel both between them and with producers. Between them, processors will have an interest in avoiding fierce competition in an internal market still highly protected by substantial customs duties. Compared to producers, they will have to raise an adequate share of their value in order to maintain a sufficient level of production: the important aid that Swiss farmers receive enables them to stop milk production and to turn towards other forms of farming, less demanding in terms of work, while continuing to receive the same level of support.

In the absence of truly opening the door to competition between producers and processors, the end of milk quotas in Switzerland resulted in the establishment of a cartel that runs the entire industry. The new aid to replace the chocolate law is intended to maintain the precarious balance of a sector that only has customs barriers that protect Switzerland from European imports. Other aid paid elsewhere still offers a way out and partly alleviate the situation of economic dependence in which dairy farmers are vis-à-vis processors. In short, the Swiss industry is based on a regulatory scheme that is neither enviable nor transposable where agricultural budgets are not so generous.